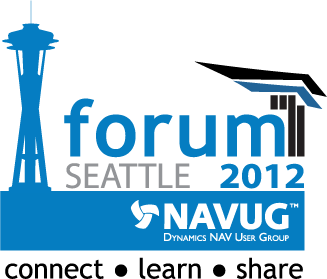 Without fail, whenever I lead a NAV roundtable discussion or training class, people talk about the reporting. I’ve only met a handful of people who are completely happy with their business reporting and most of them have spent significant resources developing reporting solutions outside of NAV. But before you throw in the towel on reporting in NAV, and spend a lot of time and money, you owe it yourself and your organization to understand what’s available in NAV. This is where NAVUG Forum 2012 comes in.

NAVUG Forum is an excellent event led by NAV users and professionals. It’s not a sales pitch. It’s not a glossy brochure full of fluff. It’s real NAV users sharing their experience and insight gained through years working with NAV. In the reporting and BI track we’ll focus how you can get the most out of the existing tools in NAV. With sessions like Reporting 101 and Reporting 102, you’ll learn how to create and modify NAV reports. Sessions on the Role Tailored Client will show you how to use the RTC to customize the data that you see in NAV. The Analysis Views and Jet Reports session will highlight two often under utilized reporting tools in NAV. The NAV 2013 sessions will give you a preview of what to expect in the newest version of NAV.

If you have issues and concerns with your reporting capabilities, chances are someone else has the same concerns, who knows, maybe they’ve already solved their problems. Come to NAVUG Forum, learn from your peers, build a network of colleagues that can help you get the most out of NAV.

See you in Seattle.